Braeburn apples are harvested in late March and April and are available through to December.

Braeburn apples originated in New Zealand in 1952 by a farmer in Waiwhero and were then cultivated by the Williams Brothers at the Braeburn Orchards. It's now one of the world's most popular apples in both Southern and Northern hemispheres with Chile being the largest producer. 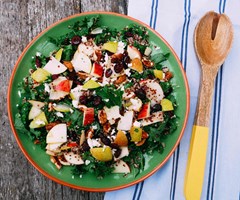