Globe artichokes are available from October until January.

Store in the refrigerator. Handle with care as they bruise easily and wash before eating.

Globe Artichokes have always been considered a delicacy.  They have been grown in Southern Europe for many centuries.

Reference for our vegetable pages include information from vegetables.co.nz 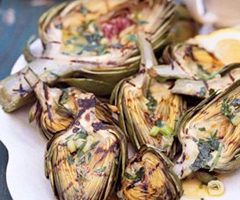