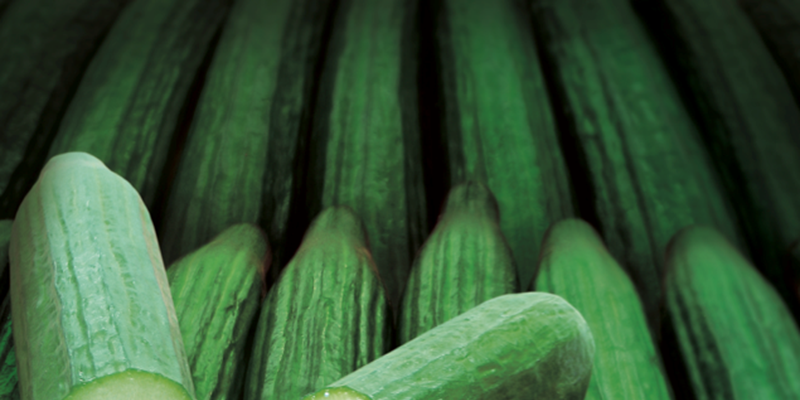 Available all year round.  Short and apple cucumbers are most plentiful in the summer months.

Store in the refrigerator but try not to keep too cold. Handle all fresh produce with care and wash before eating.

Cucumbers are thought to have originated in Southern Asia and were very popular in India. They eventually spread to Europe, where for thousands of years they were used to quench thirst.

Telegraph cucumber:  This is the most popular cucumber and is grown under glass. It is long, usually about 30-45cm, and  is often individually wrapped in plastic. Telegraph cucumbers are available all year round however they are in shorter supply February, March and April

Short cucumber:  You will sometimes hear this called the standard or stubby cucumber.  It is short and has a slightly uneven surface. Grown indoors all year round, it can also be grown outdoors in the summer.  Short cucumbers are available all year round however they are in shorter supply from May through to September

Lebanese Cucumbers: These are a recent addition to the market in New Zealand. Lebanese cucumbers are green skinned and white fleshed and are relatively small at around 12-15cm long

Apple cucumbers:  are pale yellow with a diameter of around 9cm and about 12 cm long. It is crisp like an apple and has a very mild sweet flavour

Gherkin:  These are very small, between 5-10cm long, and are grown only for pickling