Although they're thought of as a winter vegetable, leeks are usually available all year round.  Sometimes they are hard to get between November and February.

Leeks are thought of as native to Central Asia and have been cultivated in this region and Europe for thousands of years. Leeks have been the national emblem of Wales since 640 AD when, according to legend, the Welsh defeated the invading Saxons because they had leeks attached to their hats.  The leeks prevented them from attacking each other by mistake! 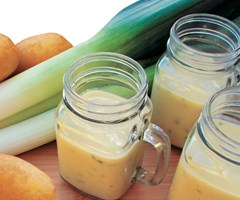