Store in the crisper of the refrigerator in a ventilated plastic bag (they are usually sold in a container you can store them in). Handle all fresh produce with care and wash before eating.

Bean sprouts have been cultivated in Asia for thousands of years and were brought to New Zealand with the first Asian immigrants in the Gold Rush days. Sprouts were made popular with the `hippie' movement in the States in the seventies and have only been available commercially in New Zealand since 1981. 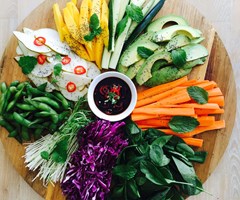