Watermelon season in New Zealand is from December to March.

Ripen on the bench, then store in the refrigerator. Handle all fresh produce with care and wash before eating.

Watermelon is thought to be native to the Kalahari Desert in Africa.  A watermelon harvest was depicted in Egyptian hieroglyphics 5000 years ago.  In Egypt, watermelons were often placed in the burial tombs of kings.

By the 10th century the growing of watermelons had spread to China, which is now the world’s number one producer. 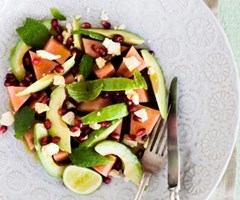